there is image from my MBPro but no backlight.

I have same symptoms with my 27 cinema display. Confirmed there is image from my MBPro but no backlight. Has been intermittent for the past year or so and had to unplug and replug a few times whenever I disconnected my MBPro for travel to get it working again. But over past two weeks haven't gotten it to light up. Took to Apple Store where they replaced the logic board which solved this issue for them but when testing it before leaving the store we could never get it to come back on again... they didn't know about the image being visible from MBPro as I just discovered this now.

From your advice, I will now test the DC voltage to the backlight. But are you saying that if it is getting proper voltage the only fix left is the entire LCD panel and the backlight can't be replaced independently?

Thanks for the great step by step troubleshooting advice!

There is a step-by-step troubleshooting guide in the Apple Technician Guide, see page 17. Screenshot included below. 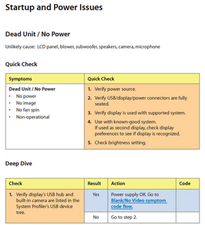 More likely the WLED driver is blown which is on the logic board.