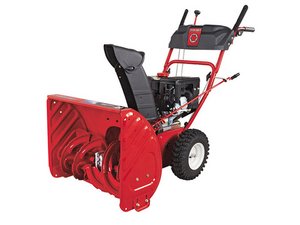 Repair guides and support for a wide range of snow blowers.

Just wondering if anyone has replaced the friction wheel on this model. I have the complete part ( has the wheel and the part that connects to the finger pivot that moves the friction wheel to select speeds/reverse and moves it right to left on the drive plate.

This friction wheel is on its own shaft that is bolted to either side of the frame, and has a gear at one end that meshes with the larger gear that moves the tires. The "finger" that may be called the pivot rod that is attached to the speed select/rev cables fits into a slot on the Friction wheel assembly.

My question is, after I tip the blower on end, remove the access plate, how do I slide this friction wheel assembly off the shaft?

I can get at the bolts on either side of the frame without removing the tires . Is it as simple as removing these bolts, tipping the shaft to remove the finger from the hole on the friction wheel assembly and sliding off the old and slide on the new? Am I going to run into any clips or parts falling off in a bad way?

As you can tell, I am not a mechanic, but have fixed many things with guidance.