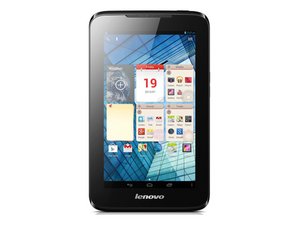 I have a Lenovo IdeaTab A1000-F tablet, very similar to the IdeaTab A1000L posted here in iFixit. After a severe drop the front glass has been cracked but the lcd is working fine. I wish to replace just the cracked part and not the whole display assembly, but I haven't yet found any guides on how to do that. All of the guides (including the one at iFixit), always end up removing the main board from the front housing and stop there. I suppose that the glass is glued to the front housing, as is the case with most tablets, but have not confirmed it.

Question 1: Does anyone know if the front glass is indeed glue mounted, and if so, would the iOpener kit do the job?

Question 2: What kind of adhesive strips are suitable for the attachment of the new glass? (supposing it is glue mounted)

Question 3: Seeing images from spare parts at ebay, it seems that the only thing connecting the glass/touch screen to the rest of the tablet is the touch screen connector, the one with the QR code, sliding through a little slot. ( https://d3nevzfk7ii3be.cloudfront.net/ig... ). Given that, would I need to remove the whole main board before attempting to un-glue the front glass, or just disconnecting the touch screen connector and forcing it back through the slot would suffice?

Can I have the model number please?

here are the specs:

In the meantime, the tablet became unable to charge! (i tried different chargers) Could this possibly be related to the glass cracking?

my lenovo A1000 idea tab's screen is been broken and touch isn't responding can u help me??

i also have same problem that teh front glass is broken however the lcd is working. i think we can get it done locally and any glass of same size will work. Make sure the touch works fine after that. Just test it before actually fixing the glass.

Apart from that i am experiencing issue with A1000 is that even if it is fully charged and if I want to turn on the device i need to insert the power adapter and then press the power key. I dont know why its not getting powered on without the power cable but it can be managed.