I just bought myself a 2nd hand iPhone without checking it thoroughly enough. everythings perfect except when i tried to call. Theres this really loud crackling static sound heard by both me and the other party and we cant hear each other AT ALL. I own an iPhone 5, running ios7.1. I used voice record and that worked just fine. can play music too. even when i turn on the speaker theres the loud crackling/static sound. please help. ):

hay i have the same problem whats wrong

I have a problem whenever I go on that has sound it's crackling.

iPhone 5 making cracking popping static like sound that distorted the audio every time I would send or receive voice message and it also would make the noise every time I tried texting. I fixed it like this.

The cracking sound disappeared on my phone and it started working fine.

yes , Really helped me this solution. thanks

I do not have this Phone Noise cancellation option?

It worked. and solved the problem. Thanks.

It was already off

The upper mic is used to record in voice recorder

Replace the dock and see if this sorts it

My phone has just started crackling and getting interrupted in the past couplr weeks. I've had this phone for awhile and it has nevet dun this.

iPhone 4s with same issue. I solve it by holding in the power button and back button together and power off and keep them pressed till apple logo appears. This resets the phone and all is good now

worked for my scratchy audio thanks

Worked for me too thank you so much

I am having the exact same issue, Replaced the doc connector and now sometimes it will be fine, and sometimes it will still crackle. If I turn on speaker mode and turn it back off during the phone call it will resolve it temporarily. I have also replaced the actual ear speaker.

I have the same problem. Only mine started right after my iPhone was left sitting out during a dust storm. It has to be dirt in the mesh of the speaker. Can I somehow replace the mesh?

Turn on noise cancel in settings general acseadillty at the bottom.

Sorry for the spelling iPhone does my nut. Lol

I work at a mall kiosk where we've repaired too many to count.What I found not sure if it helps but I had the same issue with the crackling noise. What fixed the issue for us turned out to be the charge port connector. It turned out since it was a new charge flex we replaced since the connector when they're new doesn't have as much give or hasn't been broken in. What I noticed is that it being stiff it caused the connector to slightly become raised/lifted from the connector. What I did was not put the sticky part underneath the flex cable down onto the mobo and simply connect the cable. Voila it all worked no static. Happy customer, hope this helps

Hi Have had the same issue on a 5c , replaced screen and top speaker and still the same but on further examination we found a screw had come loose and attached to the magnet on the main speaker causing feedback

this turned out to be what my problem was. I opened the phone and as i pulled up the screen a screw fell out. I figured out where it went and also cleaned out the speakre mesh while i was at it and now the phone works fine.

SOLUTION - After all that has been said I would like to suggest the most common cause of this issue. This issue will regularly occur when the charging port flex connector is replaced. In this case the crackling may be caused by a grounding problem between the top of the charging port flex connector and the metal screw panel. The top of the connector must be insulated from the screw panel that secures the ribbon cable onto the logic board. This can be accomplished with a small piece of electrical tape.

Did it work? I am having the same problem here... the problem is this static sound only happens every few days...

Same here. A caller hears crackling during the ringing before I even answer. I want to know if replacing the lightning dock assembly worked.

When I call out to a friend via my iphone, it crackles while it rings, so I hang up. It is the strangest thing. Not sure yet how to fix this problem.

the loud crackling in from blocked speaker .... sound can't exit so the sound is bouncing off of clogged mesh..... all you have to do is change the mesh that the speaker is facing and its fixed. I changed the speaker but noticed when i tried to make a call it echoed but when i had the phone open and speaker slightly slanted not pushed down it sounded clear so i checked the mesh and it was clogged and full of filth after that it sounded clear.

The earpiece of my 5S is crackling for some time. I replaced the earpiece but still no luck. Trying to understand what you mean by "change of remove the mesh". can you be more specific?

Discovered that the sound was fine when the screen was "loose", on top of housing, before pressing it inside the frame. So apparently something is being "jammed" when putting it together.. Cant see anything "abnormal", and have tried cleaning all contacts etc...

What could possibly cause this i wonder..?

Hi, I think I have the same problem. Changed the earpiece but no change.

Also I had a struggle puting the new earpiece back. The small frame that holds the earpiece in place is popping out and the larger screw is not screwing.

Have you solved your sound problem?

I put all new hardware, and still same thing.

I have the same problem. If I plug in ANY headphones all I hear is static. Same if I try to make a call to anyone it's all static. My microphone doesn't work either but FaceTime is fine.

Did you find a way to solve this problem? I am having a similar problem with an IPhone 6+ that just got the screen replaced. If anyone knows how to solve this please reach out to me via email at macbrosrule@gmail.com with the subject "IPhone fix". Thanks.

Restart your iPhone and see if it will work after. Works for me. I have and iPhone 6.

If it doesn't work put ur phone on "speaker" and u should be able to talk to the person u are trying to call.

I have the same problem with brand new iPhone 6 plus, facetime and third party call app works fine only with cellular network i hear the static sound, I've tried every reset/restore. Apple dealer did hardware diagnostic and everything tested fine. SIM card woks fine on other device. So my guess it has to do with intervention between earpiece speaker and antenna. I had no accident with my phone, and it was working perfectly for 4 months before this happen. any advice? I tried changing speaker and cleaning the mesh, not working!!

I accidently found that twisting the phone in a certain way makes the sound disappears. it works for sometime but recurs again shortly after. I checked all connections are secure, it must be broken connections! I am thinking of changing the charging port connection.

Interestingly enough it has been about a week now that I have been facing a VERY similar situation with my iPhone 6.

SIM card has been tested on a different phone and it was proven to be fine (meaning the issue was with my phone and not the service provider). Calls that are going through the mobile network either are full of loud crackling sounds which can be heard at both ends or are fully silent (meaning no sound goes through at both ends of the call) and this is true whether I use the phone set, speaker phone or headphone.

Everything else that makes use of the speaker and mic work (Whatsapp, Camera, Wifi-Call, Facetime...).

Where you able to find a fix?

Very late to the crackly iPhone party, but I thought I’d share my experience for people having similar issues (and seeing as this thread seems high up in Google’s search.)

I’m running an old iPhone 5c. The screen broke, so I replaced the screen, swapping the earpiece and camera out from my old one, and replacing the ropey old battery while I was in there. Put the phone back together and everything was working fine except for making calls where there’d be the most annoying static, crackling, modem noise. Sounded like it was badly grounded. Also I found that the phone would heat up excessively during calls (-only calls, not during any other processor-heavy task).

Tried a hard reset/restore but still had the same issue. I could receive calls fine on speaker phone but not through the earpiece speaker.

In a final act of desperation I removed the screen from the motherboard and unscrewed the metal earpiece assembly on the back of the new screen. While I was doing this I noticed that one of the thin insulating foam pads on the back of the proximity sensor ribbon cable had slipped/perished slightly and so it had been touching the back of the metal cage holding the earpiece in place. I cut a new square of electrical insulating tape to cover the exposed metal patch on the cable. I also noticed two exposed patches of metal behind the connectors on the two ends of the cable that connect this cable to the motherboard, so I cut tape to cover these too. I reassembled the phone and tested a call. Beautifully clear speech with no crackles and the phone stayed cool to the touch. Sweet! 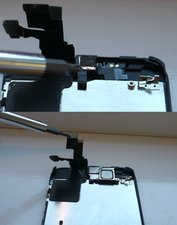