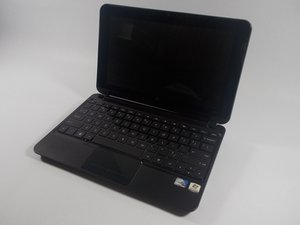 While waiting for my kids to arrive on Thanksgiving I opened the back of the above HP mini 210 and removed the drive as I have a new one coming. The kids arrived and rushing I put the drive back in but had to put it away for now. The next day when I returned to it I had 6 tiny screws and a very small circlip left with no place to put them. The screws (4) I had taken from the holder around the drive were in place. I carefully examined the open body for screw holes and nothing anywhere I can find. I looked at your guide and it doesn't say/show any of them just that the back now snaps back on. But these screws are exactly like the ones used in the mini even to the color or the thread lock on them. The new drive will be arriving soon and I obviously don't want to leave the screws and circlip out of the machine I am hoping somebody knows where they came from. It had to be at or near the very beginning of opening it up.

Try looking through our guides here to compare screw placements between the guide computer and your own. Good luck!