Red vertical lines in black areas of the screen.

From what i know the computer was exposed to moister and the screen went dead after a while.

My friend bought a new one and just kept this one in storage.

When i got the computer it wasn't charged so i removed the bottom cover and let it trough the night on a dry place charging, i also disconnected and reconnected the display data cable.

The next day the computer was running ok and the screen was fine.

Yesterday, after almost a month of using the machine without any complains of whatsoever vertical red lines started appearing in black areas of the screen (not all blacks, but certain blacks). There was some humidity in the room but nothing out of the ordinary.

The image is ok trough an external monitor.

I opened it again and once again checked the display data cable and noticed for the first time some oxidation (green rust) on some of the connector pins. The other time i might have overlooked.

What should i do, the computer is out of warranty and a local Apple repair shop told me by phone that they normally replace the entire screen or the motherboard in this cases.

It's a shame because the computer is running great otherwise. 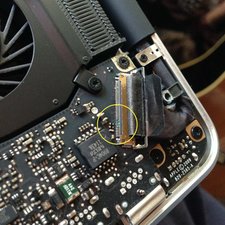 Hi Dan, thanks a lot for your input, here is a hires picture of the connector, hope it's close enough for you to take a good look at the connector. 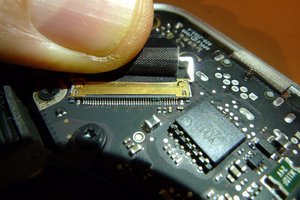 I have the same problem but I have a PC idk its maybe lcd problem ...

After disconnecting the battery.

The baking soda should dissolve the copper oxide (green stuff) but you don't want to leave any residue on the parts which is why you need to clean it again with the water and lastly you need something to help in drying out the water which the alcohol can do.

Use cotton swabs (Q-Tips) to blot the areas and a tooth brush to scrub if needed, just be careful you don't snag or break off any of the tiny components.

Hi Dan, thank you for your answer, can you take a look at the picture above, do you still suggest using baking soda, distilled water and alcohol? By looking at the picture do you think the problem i'm having could be related to this?

For sure any corrosion can effect the signaling. Not just here but any where on the logic board.

Helder Luis, just checked the pinout of your corroded connector. Yes, it is entirely possible that the corrosion is what gives you the trouble. Clean it the way Dan suggested.

Hi, yesterday i tried cleaning it following Dan suggestions and it didn't work, should i try harder?.

From what i can tell the problem might be irreversible, the corrosion might have destroyed some of the pins. If that is the case, is there something i can do?

I don't want to replace the motherboard because of a few corrupted pins.

There must be a way to repair it.

Luis, did you get all of the green stuff off? And did you check the rest of the logic board for any damage? You may need to remove it to see the other side. For now can you take a good hires picture of the connector again so we can see how it looks. Using some flux and a heat gun you should be able to reflow the solder on the connector if it needs it.