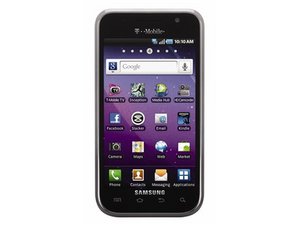 The Samsung Galaxy S 4G is an Android 2.2-powered smartphone with a 4-inch AMOLED touchscreen display and 1 GHz processor.

My Samsung Galaxy S 4G wont charge or turn on!

I got a samsung Galaxy S and it was working fine till one day i used the charger for a differnt phone. Then I pluged my phone back in and it would look as if it was charging. Then it said fully charged unpluge charger, so I did and it went back to 0% charged. So I pluged it back in for like 30 minutes and then unpluged it and it was still charging!! By halfway through the day my phone turned off and i just thought it died so when i got home i put it on the charger a couple minutes later i tried turning it back on and it wouldnt. Helpp please!!

so i bought a new charger that connets to the computer and it started charging again. But i have to keep the charger to one side, and hold it there if i just leave it there it wont charge. I know its the charging port from inside the phone should i take it to a phone shop so they can fix it?

Yes, that is absolutely possible. You could even do it yourself if you are somewhat handy. Check this video http://www.youtube.com/watch?v=OA-AWX1Wl... The charging port can be purchased online and needs to be soldered on.

Okay thanks but that looks to risky for me I was looking at other ways to charge my phone and i just striped these two wires and connected them to the back of my battery and its charging now and i actually charges faster (: but i am hoping to get the charging port fixed soon but its just to expensive. :/

just make sure that you are not overcharging your battery and destroying it, as well as your phone. Best of luck to you.

What will happen if i over charge it?

It sounds like you have damaged a charging circuit inside the phone. If so, it would be very hard to repair yourself. You should take the phone to a repair shop.

ohhkay thanks im just glad that i dont have to buy a new phone. c:

thanks im going to try