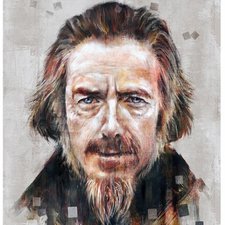 How do I reset the onboard chip to my MacBook battery?

I recently purchased a used A1181 first generation MacBook Core Duo 2.0 GHz black. I got it for a good price because the battery would not charge, but the computer worked perfectly otherwise.

I brought it home and started to mess around with it. The mag safe light was green and allowed me to operate the computer. If it gets unplugged the computer immediately shuts off. The battery indicator icon in the upper right has the charge symbol and it shows 0% for the battery.

I don't have it on at the moment, but I remember that it only had 131 charge cycles. To me it sounded like the previous owner had left the computer in sleep mode on battery power for too long and that it completely discharged itself.

I had also removed the battery and put it back in while the computer was plugged in. A few times I saw the orange light come on at the mag safe connector but it quickly went back to green.

Relevant to this question, I also was recently given a used XBOX 360 controller with a rechargeable battery. When I plugged the charging cable into the controller, it would light red to indicate it was charging, then after 3 seconds or so it would go to green to indicate that charging was complete. The battery would only work for a second before shutting off. So I found this video: http://www.youtube.com/watch?v=QXaIlyjvv...

it gives instructions on a way to short out the battery and reset the onboard chip. I tried it and it actually worked. The battery fully charged overnight and I was using it this morning.

So back to my question. I'm not going to just randomly start shorting out connectors for my MacBook. However, I think that it should still have life left in it at only 131 charge cycles. Does anyone know of a similar trick that can be done to reset this battery? I'll take all responsibility and will do this in a safe environment with all precautions. I've worked with electronics before and I just wanted to see if this were possible. I can't find any pinouts for the battery itself for me to guess either.

I've also reset the SMC (taking the battery out, unplugging it, and holding the power button for 5 seconds before hooking everything back up again) and resetting the PRAM although I'm sure that did nothing.

My wife has a 13" MacBook Pro and I've also tried her magsafe adapter (same straight plug, not the angled one) with similar results. Computer works with no charge.

Also, the couple second charge I mentioned earlier allowed me to see the first green dot on the battery quickly blink before stopping when I pushed the test button on the battery.

A few more things to add. First, I've ordered another battery which will probably be here next week. The battery that is in my MacBook is an OEM Apple battery. I've seen a lot of mention about the CoconutBattery software, so I downloaded it and I'll post what it says below. I'm currently running Leopard and am planning on replacing the hard drive and installing Snow Leopard after.

Here is the battery readout:

The first thing is that you don't know if your laptop is capable of charging a battery. It may be you got it cheap because it is defective. When an A1181 can't charge a battery, it's often the battery connector, which is replaceable and costs about $10 on eBay, but it's also often the board, which obviously is a much bigger issue.

So the first step is to verify that your new battery charges. If it doesn't, it's very possible you have two good batteries, and one computer with a problem.

If the new battery does charge, your original battery is probably just bad. I go through hundreds of used MacBook batteries, and there are bad ones showing all kinds of numbers, and I wouldn't say the Coconut Battery numbers you gave are all that remarkable.

A good battery will charge up after sitting several days on "battery only". Sometimes it will take a few minutes to start charging, or even 20-30 minutes if the battery has been sitting on a shelf for years. I think it's largely a myth that modern batteries need to be treated a certain way, or else they will go bad. That said, OEM batteries are much higher quality than 3rd party, and one major drawback of a 3rd party battery is that it will typically discharge completely if the computer is left overnight in sleep mode, whereas an OEM battery will take several days to discharge. But again, leaving a computer in sleep mode for days is not some sort of magical act that will automatically kill a battery -- it generally won't.

I received my 3rd party battery yesterday in the mail. I put it into the MacBook and fired it up. It started with the battery only so that was a start. Then I plugged the Mag Safe adapter into it and it went amber as well as the charge symbol on the icon.

So I fully charged the new battery let it stay plugged in for several hours after it was complete. Then I unplugged it and let it go completely dead. Let it sit like that for several more hours. Then fully charged it overnight. I'm going to do that a few more times to see if conditioning the new battery in that manner will help it last longer. Still wish I could do something with the Apple battery besides giving it to them to recycle. :(

did the counter reset with the new battery?

I know this is from 3 years ago. Just in case someone comes across this and has the same question, yes it did. The counter is from the on board chip that is with the battery. So changing that out will also change the cycle counter.

Your battery will never drain fully even if it says "empty" or "0%". The reason for this is that modern LiIon batteries have complex electronics that will prevent them from doing so, as that could cause damage to the battery and even to the computer. So even if the battery is empty, there is still a remaining charge inside to prevent it from taking damage.

In your case, your battery is simply dead. The time you spent reviving it, well, calculate how much you earn per hour and how much a new battery from Apple, not a third party one, would have cost you. ;)

Resetting the onboard chip or shorting the pins is not a reliable solution since the batteries are trans-communicating to the system based on rolled out firmware versions. It may seem as if working but that is fatal. You can not rely on that. You got a great solution by purchasing a new one (the right part) as you have mentioned. I would do the same.

What I was wondering is if you have a brand new battery in the Macbook. Then it goes to sleep and you just let it sit there for several days on the battery only. From what I understand it will fully drain or discharge the battery and the laptop will no longer charge it.

So if this were to happen with even a brand new battery with a dozen charge cycles, there is no way to reset it to bring it back?

It will charge up just fine. As said, the charge circuit doesn't allow the battery to dip below a certain voltage. Trust me, Apple has accounted for many a situation like this.

It's simply a non issue if things are in working order.