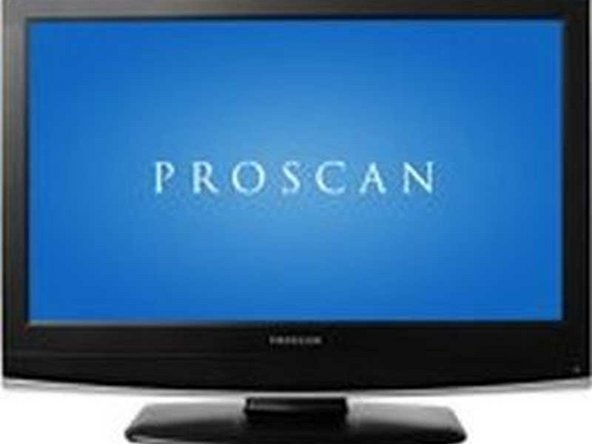 I was given a Proscan 32LB30Q flat screen LCD TV that was described as working intermittently less and less over time.

When I plugged in the TV, after vacuum cleaning and wiping down with 91% Isopropyl alcohol and a damp towel, I found the red LED on the face of the TV by the power On button comes on and I here a relay click in the middle back.

When I pressed the power button, I heard the speakers make a brief low volume static noise that goes silent and then the previously red LED flashes blue seven times and then stays solid blue with nothing other than a black screen the whole time.

When I cleaned the system... I did notice what looked like discoloration above and maybe on two of the transformers (top two) on the CCFL power supply or maybe is called an inverter board more accurately. I didn't notice any leaking or bulging caps or burn marks anywhere else on any of the other boards.

The Power Supply Board voltages outputs were in specification. However, the CCFL Inverter Board input at the connector was found to have the MOD-SEL PWM reading 4.0V and the BLON wire reading 0.0V.

After testing the BLON (red) wire during the power on process, I found the voltage reading went up to 4.9V after pressing the ON button and then before the second blue LED blink, and around the time of the audio static noise, the reading went back to 0.0V.

The T-Con and Main Board will also be described regarding how to replace thanks to others feedback regarding replacement when a sound is present during, and primarily no display on, startup.