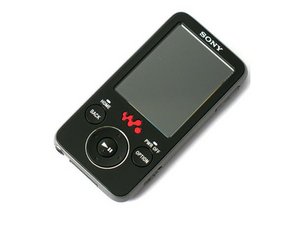 Released in 2008, the Sony Walkman NWZ-E436F is a portable media player with a 2-inch screen. It can play audio and video and has a built-in FM radio tuner.

The Sony Walkman NWZ-E436F is a portable media player released in 2008. It has a 2-inch screen at the top and a circular control pad just below. The pause/play button is situated at the center of this ring of controls, with a dedicated back button to the left of the ring and an option button to the right side. The chassis is made from plastic, but reviewers noted that it still felt sturdy due to its 50 g (1.8 oz) weight. The important controls include the volume up/down buttons and the hold switch on the right edge. The ubiquitous 3.5 mm headphone jack sits on the bottom edge alongside Sony’s proprietary WM-PORT which is used for charging and connecting the device to a computer to transfer files.

The NWZ-E436F has the ability to view/play audio, video, and photos. It also has an FM radio tuner built in, so you can listen to radio stations on the go. Since the player is too small to have an FM antenna inside, it instead uses the wires in your headphones as the antenna. The NWZ-E436F is relatively straightforward to disassemble. The process is shown in this YouTube video and the device’s service manual. Crucial components like the battery and screen can both be replaced, although the difficult part of the repair might be finding a suitable replacement part. The service manual also includes electrical diagrams if you need to test the circuitry for faults.

To identify this device, flip it over and look at the small text near the bottom of the back side. You should see the model number “NWZ-E436F” along with some words like “digital media player.” This model has 4 GB of storage space, but Sony also produced other configurations like NWZ-E435F and NWZ-E438F which are the same except with 2 GB or 8 GB of storage, respectively. Any guides online for these three models should be interchangeable because the devices are very similar.