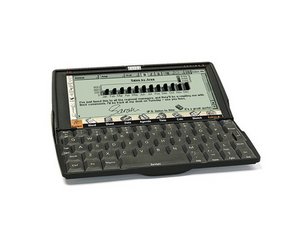 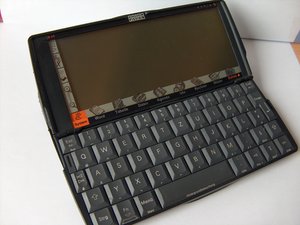 Here's a Psion Series 5 for disassembly. It's manufactured in 1997 and made in the UK. It was very popular for business men because of the stable OS, named EPOC. (Now known as Symbian OS) It's powered by two AA batteries. It has a 640x240 pixel greyscale LCD with a backlight. The keyboard is generally considered to be amongst the best for its size, with large-travel keys and touch-type capability. The most common problem was a design fault in the screen and keyboard cable. By opening and closing, the cables get stressed and lead to vertical lines on the screen.