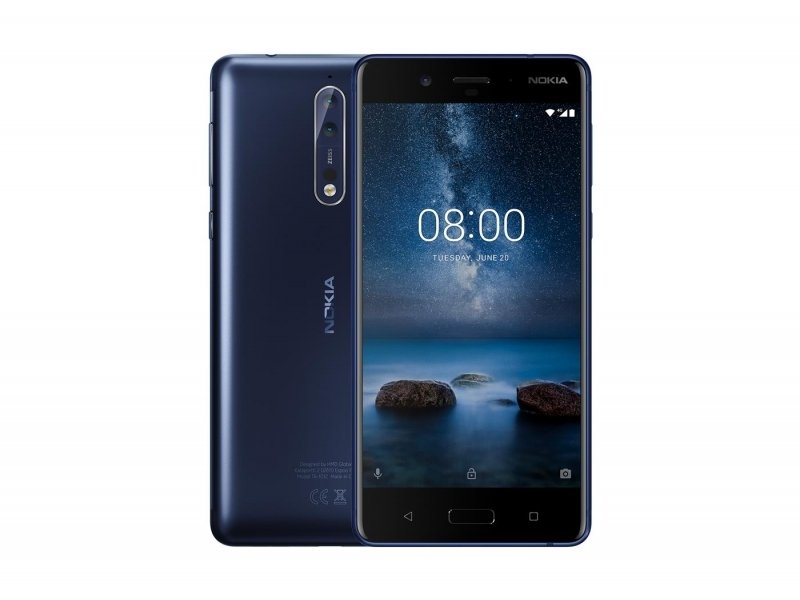 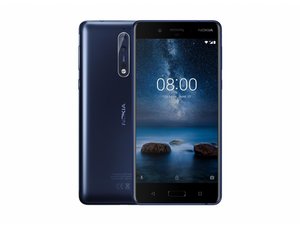 Nokia 8 is a high-end Nokia-branded smartphone running Android Nougat. Announced on 16 August 2017 in London, England, it was developed in Espoo, Finland, by HMD Global. The phone began sales in Europe in September 2017. Nokia 8 is the first high-end Nokia-branded device since Nokia Lumia 930 in 2014. An improved version, the Nokia 8 Sirocco, was announced on 25 February 2018 at the Mobile World Congress in Barcelona.

The Nokia 8 has a 5.3" display and averages 7.3 mm thick and 4.3 mm thick at the edges. It is available in four colors: Polished Blue, Polished Copper, Tempered Blue and Steel. The device features a full-length graphite-shielded copper cooling pipe that is designed to pull the heat away from the Snapdragon 835 chip and dissipate it across the full length and breadth of the smartphone. The phone is not water-resistant but is IP54 splash-resistant.

Nokia 8 is the first Nokia-branded phone to feature a dual-lens camera system. The rear camera module includes a set of two 13 MP sensors, of which one is an RGB sensor, and the other a monochrome sensor. The rear camera is equipped with optical image stabilization (OIS), f/2.0 aperture, PDAF, an IR rangefinder, and a dual-LED flash.

The front and rear cameras' combined standout feature is an advanced dual photographic image camera (rebranded "Bothie" by Nokia), where the cameras can be used simultaneously by dividing the screen into a split-image setup, a technology Nokia calls Dual-Sight mode. Both the front and main cameras use ZEISS optics.

Video recording can be done in resolutions of 2160p at 30fps (4K) and 1080p at 30fps (FHD), with single-touch live streaming to social networks. The cellphone contains several microphones able to record spatial audio 360° with binaural audio codecs, providing high fidelity playback through OZO Audio technology, which was derived from the Nokia OZO camera. The phone is equipped with a single rear-mounted loudspeaker, so is not fully Dolby Atmos compatible.

It is equipped with a 3.5 mm headphone jack and Bluetooth. These audio outputs use the OZO spatial audio playback to produce high quality 360° surround sound from two speakers(or earbuds) and use decoding standards compatible with Dolby Atmos and other earlier surround sound standards.

Like the Nokia 3, Nokia 5 and Nokia 6, it ran a near-stock version of Android 7.1.1 "Nougat" on release. One difference is the camera mobile app, so as to cater to the phone's Dual-Sight feature. It also comes with an always-on display, similar to Nokia's previous Glance Screen on the Nokia Lumia series.